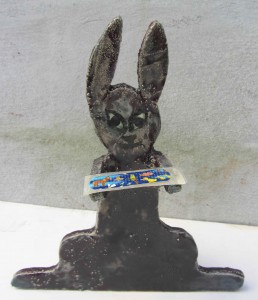 The rabbit is often seen in Lars Ravn’s works. Again and again he returns to the small vigilant animal with its merry sexuality. It is an appropriate animal for signifying Lars Ravn’s world. In his pictures there is an urge to keep the senses open to the world. Man approaches the world through his mouth, nose, eyes, ears and hands. No matter where we come from and to what culture we belong, we have that in common. Sharing the sensory world is an opportunity and, according to Lars Ravn, also an obligation.